Like every adolescent boy that has ever fantasised about owning a pair of X-ray specs, Shane Forrest has imagined peering through the walls of other's peoples houses. In Float, Forrest depicts a bug's eye view of what goes on behind closed doors in an average suburban Aussie street. And, just as twelve year old boys everywhere have always suspected, the couples inside are getting down to business.

Of course this really comes as no surprise. All serious students of pop culture know that cul-de-sac culture is a hot bed of sex. We read all about it in the steamed-up pages of pulp fiction or in more highbrow tales of a bored and lascivious middle class by literary luminaries such as John Updike. In paintings of cosy and familiar rooms, Balthus draped young girls in seductive poses over upholstered furniture, while in Edward Hopper's sun drenched interiors everyone seems transfixed by a kind of post-coital melancholy. From the manicured lawns of TV's Desperate Housewives, to Charlotte Haze's modest backyard in Vladimir Nabokov's Lolita, or Jacqueline Susann's Valley of the Dolls, the landscape of the burbs is made for love, or something like it.

Each of Forrest's artworks resembles a doll's house post-cyclone: collapsed, flattened, and skewed. Some are literally folded into sculptural wall hangings, while others are two dimensional works on paper, but all of them afford simultaneous glimpses of interior and exterior. Forrest combines layers of painting, drawing, photography and collage to accentuate his visual strategy of multiple perspectives. In the tradition of Indian/Pakistani miniature panting, he has paid loving attention to decorative surfaces. Brick walls, fake wood panelling, chequerboard lino, Persian carpets and floral wallpapers are rendered in detail and sometimes supplemented by swatches of the real thing. Forrest also takes care to point out each home's assets, from two car garages to spacious bathrooms and built-in swimming pools.

In fact, the titles in Float, phrases like Semi Detached Original Features, Old World Charm, Over Sized Living Under-priced Luxury, read like a list of real estate huckster clichés. Forrest clearly has a cheeky sense of humour and a social conscience. He seems intent on poking fun at a property obsessed middle class, keen on 'keeping up with the Jones' by conspicuously displaying one more satellite dish, BMW, or shabby chic renovation; a morally deficient culture that defines itself by what it consumes rather than its ideals.
Maybe Forrest's frisky couples are a reminder that there are more important things in life, things like love, lust and making babies? Interestingly, the work titled Our House is one of the most chaste. Nobody is home at Forrest's house, and nothing remotely saucy is going on. Perhaps he has neighbours who bang the bed-springs at full volume 24/7, driving him to a raging, jealous insomnia, and these works are a form of catharsis? Then again Forrest may just be fixated on sex.

Either way, I find it unnerving that in Forrest's work, only heterosexuals seem to be getting any action. Although some women are seeing to themselves, leaving their sexual orientation open to interpretation, there aren't any same sex pairings, or even men flying solo, a statistical improbability to say the very least. Are there no loved up queers in Forrest's virtual community? And, call me old-fashioned, but Forrest's tiny portraits of people in Karma Sutra poses distract me from the quirky charm and political subtlety of his complex compositions. But I guess sex is distracting, maybe this is the point? 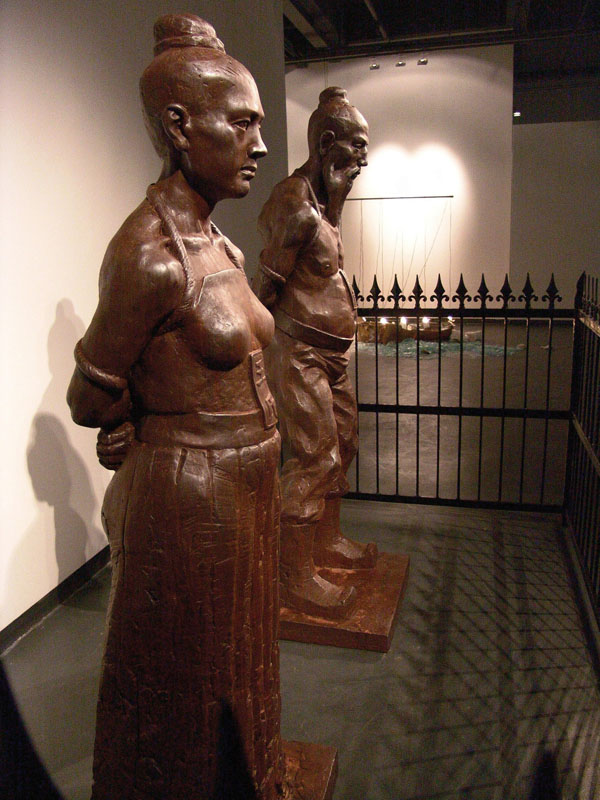 This article looks at the recent works of New Zealand artists Michael Parekowhai, John Pule and John Reynolds to explore notions of identity through text and image relations. Parekowhais sculptural piece The Indefinite Article spells out I AM HE in an ironic critique of Colin McCahon and goes further through wordplay to cement a link between the word, identity and the complexities of translation. Reynolds Cloud comprised of nearly 7,000 white canvases transcribed with words from Harry Orsmans Oxford Dictionary of New Zealand English and acts to illuminate New Zealands separate identity and regional diversity within a worldwide community of English speakers. Stories of migration, of dispossession, of alienation characterise the work of John Pule. Similar to Parekowhai and Reynolds, Pule deploys words to multiply meanings and confound interpretation or translation.

Emily Floyd against herself

Emily Floyd is attracted to texts that focus on identity and place and that offer new ways of thinking about these issues in the light of globalisation and post-colonialism. She is interested in the malleability of language and its connection to knowledge and power. The process Floyd employs to produce her numerous large-scale wooden letters mirrors the anxiety and obsessions with the various novels they are referencing  Dostoevskys Crime and Punishment, Kafkas The Trial and Camus The Outsider. Sarah Tutton looks at Floyds practice, calling particular attention to her recent installation works its because I talk too much that I do nothing, Gen-existential Crisis and Compulsory for young intellectuals.

James Stuart explores the spatial and interactive aspects of text-based artworks, leaping off the page and into the textual practices of Peter Lyssiotis and Franz Ehmann. Lyssiotis is a writer and photomedia/collage artist and creates books that generally combine his own artworks and writings in collaborations with others. Among the most impressive of his projects is the recent A Gardener at Midnight: Journey into the Holy Lands, developed as part of a Creative Fellowship at the State Library of Victoria in 2003 which is of particular focus in this text. Brisbane-based/Australian-born Ehmann is concerned with the physical reading environment of the gallery and in turn deploys a multi-disciplinary approach to the physical space and temporal duration of his exhibitions. Via the works of these two practitioners Staurt here wishes to posit the very real sense of bodily and not just intellectual interaction with language that reading entails.

2006 marked the 6th Gwangju Biennale: Fever Variations in South Korea. Stephanie Britton sets the scene for what she describes as having been generous and daring, though not grand or pretentious and never (that kiss of death) magisterial. This event saw a definite shift from an international focus to look more intently at Asian preoccupations of the recent past as played out in the minds and hands of artists. Some of the simple headings at the recent Biennale were Myth and Fantasy; Nature and Body; Trace of Mind; Past in Present, as a way to initiate dialogue and illuminate the stories of how Asian artists began to work within an international context. Some of the artists showcased were Xu Bing (China), Kim Jong-ku (Korea), Miwa Yanagi (Japan) and Lee Sookyung (Korea).