Some Cultural Baggage on the Australian Literary Scene 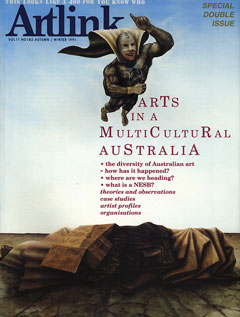 Above all we need new myths to suit the new Australian culture which is part of the Asia Pacific region. We can't live by Aboriginal myths alone, as some have suggested, in a land so changed by our coming. The unpacking of cultural baggage by writers of all cultural groups, old and new, has to continue until it gives rise to a myth which we all recognise as fitting the Australia to which we have contributed. Wrote David Malouf.

A reference to Wittgenstein's Zettel.

A great deal of agonising has gone on since the 1988 Bicentenary about the nature of Australian identity and therefore the nature of our distinctive culture.

List of Resource Material for the Arts in Multicultural Australia

A great starting point for more research in this area. List prepared by Dr Helen Andreoni, of the School of Aboriginal and Multicultural Studies, University of New England.

How Clay Speaks for Neville Assad

The alphabet was invented, so they say, in Lebanon. To some Lebanese, their country represents an un-broken link with the birth of human history. Non-Aboriginal Australians, by contrast, share stories of interrupted family ties, of exile and forgetting. How then do these Lebanese relate to life in Australia?

Desultory Remarks from a NESB Museologist

It is evident we are trying to redress an imbalance in the cultural representation of our heritage and arts.

Looks at the art practice of Ginger Riley Munduwalawala, born in 1937 at Ngukurr in the Northern Territory. Good colour photos of the artist and some works.

"I used to boast about you, my son the painter. You painted trees, now you paint squares to humiliate me." Quote by the artist's father in the early 1970s Melbourne.

Ritual and ceremony enrich all aspects of Jewish life, its life cycle events and daily life. Jews give constant thanks for God's munificence - for the first fruits of the season, for the food on the daily table, for new clothing donned. Everything is inbued with significance and for all events there are rituals.

The Odyssey of Salvatore Zofrea

Zofrea wrote "I want my work to sing forever."