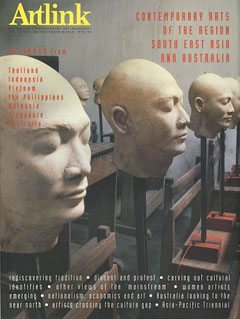 A survey of the role played by politics in art and vice versa before during and after Independence from the Dutch. Artists were employed by political parties to promote their ideologies; by 1950 artists rejected this. Some were arrested for depicting social realities. 20 years later a new group took up the baton, and again incurred the displeasure of the government. Humour was adopted as a means of expressing truths.

To be an artist

The author recounts her education in a Thai boarding school under the male patriarchal system. As an artist she has tried to come to terms with her upbringing and her work has reflected the situation for her mother and grandmother as well as the death from cancer of her father. She describes her installation work 'Dinner with Cancer' as a commentary on consumption - "humans are not only consumers, they are also being consumed".

Posturings under the Bodhi Tree: The selling of Pseudo-Religion

Thai artists of the 'Buddhist Revival' claim to make Buddhist art just because they use the visual conventions of that tradition. The Tantric mandalas have been widely misappropriated. As soon as you take temple art out of the temple you run into difficulties of definition and authenticity. There is still traditional Buddhist art being made in the temples, but there is a great trade in pseudo-Buddhist art which is cheap and damaging.

From early 80s artists began to search for local identity - the use of local indigenous materials was part of this. One 70s pioneer was Junyee who used living plant material in performance art. Roberto Villanueva and Santiago Bose work in mixed media to explore ideas of being Philipino in a modern world. Imelda Cajipe-Endaya's paintings deal with 3rd world citizens, women, migrant workers, poverty. Roberto Feleo uses mythic narrative in a playful idiom.

Theatre director Krishen Jit talks to artist Wong Hoy Cheong about contemporary Malaysian art and his adoption of a figurative style of painting after he returned from study in the USA. This is being used by young artists in Malaysia as an expression of rebellion, as is performance art. Malaysian society avoids dissenting voices and has been slow to accept the angst in modernism, which perhaps has only just been fully internalised though it was introduced in the fifties.

Hanoi was founded 1000 years ago, and has always been an important centre, culturally and economically. Its Ancient Quarter is a miraculous human-scale blueprint for living and working and much of its original character survives today. The French Quarter built in the 19th Century was a sensitive complement to the old Asian architecture, but today all this is threatened by ugly, insensitive development motivated by greed. Hanoi needs a handsome prince to rescue her!

David Castle's jewellery has been influenced by over 15 journeys to Indonesia since 1972, particularly the islands between Darwin and Bali. He finds the ceremonial activities of the Balinese attractive and this is evident in his body adornment pieces. He was an artist in residence in Kuala Lumpur in 1991 creating links with the University of Tasmania in his home base Launceston where his current exhibition Journeys was held.

Modern Art in Thailand: A Glimpse

A sketch of the main institutions and galleries, the prizes, sponsors and patrons, as well as a list of the main galleries was a guide to the art scene in Bangkok at the time of writing. Several of the large hotels also had commissioned murals as well as acquiring new works by contemporary Thai artists.

Culture of Silence: A Reading of Three Malaysian Artists

An overview of the history of Malaysian modernism and the work of three artists who rebelled against their Islamic-style training at the Institute of Teknologi Mara. Riaz Jamil Ahmad, Ahmad Shukri Elias and Tengku Sabri. Riaz and Ahmad paint in a neo-expressionist figurative mode, Tengku makes carved wood sculptures which have echoes of old Malay motifs. After some years of dissent the three have adopted a stratgic self-imposed culture of silence.

An Art Space in QSNCC

The Queen Sirikit National Convention Centre was opened in 1991. It includes an art space managed by the new company CON-tempus which strives to introduce the idea of an art dealership in an art community in which up to now artists have had to handle their own marketing and promotion. The directors hope to foster art collecting, and make artists less commercial in their outlook and more willing to create better and more radical art.

Women make up 30% of painters in Vietnam yet have received little attention. Women face many obstacles to success. Married women whose husbands do not approve of their practice are the most disadvantaged. A handful of women artists have become known, and one has taken part in exhibitions overseas. Previously there used to be annual group shows of women artists, but now the trend is towards solo shows.

Contemporary Arts of the Region: South East Asia and Australia

Background to how the special issue on South East Asia came about, and speculation that Australia is at the crossroads of a new sensitivity to Asian culture and a desire to be part of its development. Despite growing industrialisation Asian cultures are still distinct and hold highly contrasting attitudes to artistic expression. Thanks to Neil Manton of the Dept of Foreign Affairs and Trade for his influence in funding this project.

Curtin University developed ties with Indonesia, Singapore and Thailand since its foundation in the sixties, initially through Engineering and Business and then through the Design School spearheaded by artist-lecturers Nola Farman, Paum Gaunt and Head of Design John Teschendorff. Frequent visits and exchanges and enrolling Asian students have all helped the School of Art there to identify as a South East Asian art school.