Yolngu people, the traditional Aboriginal owners of North East Arnhem Land, use the word mulka to describe a sacred, but public, ceremony. Mulka also means to protect and share things that are important to us – things that hold our identity, our culture, our connection to country and our past. When our people decided to bring together the films, photographs and audio recordings made in and about our community, the Mulka Project was born.

Anthropologists have been coming to North-East Arnhem Land and recording the sounds and images of our communities since the 1920s. Missionaries came to our community in the 1940s, then school teachers came from the 1950s, and they recorded many aspects of our daily life. Then, in the 1970s and 1980s, Yolngu people started taking their own photographs and making their own videos and films.

Ten years ago we realised there were thousands of sound and image recordings of our community spread across Australia and around the world. In 2007 senior artists working with our Art Centre in Yirrkala, Buku Larrnggay Mulka, decided it was time to bring these records together in one place. The aim was to protect and share the Yolngu cultural knowledge of northeast Arnhem Land so that future generations could look back and learn from us. We wanted The Mulka Project to show current and future generations how our Grandfathers and Grandmothers lived so that Yolngu culture remains strong.

Our idea was to create a library filled with stories, images and sounds from the past which could be seen and heard today, and into the future. From the start we talked about building a digital archive made up of films, photographs, and audio recordings of music, singing and people speaking. We hoped the films, photographs and recordings would show how Yolngu people have lived over time – our ceremonies, country, art and achievements.

Money raised from a successful art exhibition, The Saltwater Collection, was used to kick-start the project under the leadership of community members. To start we brought together all the things we had here in the community – the photographs, films and audio recordings stored or hidden around the place. Then we went searching for the films, photos and recordings from our community that people had taken away with them, and we brought them back.

In the process, we started to think more about how we could get better at recording, storing and sharing the new things happening in our community. We also had to learn how to use new equipment and technology, and involve our young people, so we could all get better at documentation. In the beginning it was hard. We had very little – just one small room with three computers and only a couple of cameras. We believed each time we took a step forward, things would get better and bigger, so we just kept taking steps forward, even though it was new to us.

Over the past nine years The Mulka Project has grown. It is now a thriving digital archive, multi-media production house and community learning centre. We have an archive of more than 80,000 photographs, sound recordings and films, which is owned, managed and operated by Yolngu people. There is a video-editing suite, a music-recording studio, and a digital learning centre, the Yalu (nest), where community members do media training.The films, videos and photos in the archive show Yolngu people engaged in all aspects of community life and ceremonial law, dating back as far as the 1920s. There are images of people performing ceremonies, fishing, hunting, playing sport, collecting bush materials, making art and meeting with special visitors. The sound archive includes recordings of language, songs and music, and interviews with our grandfathers and grandmothers over time.

The Mulka Project is not just about holding on to things from the past. It is also about documenting the present, which is a big part of what we now do. We are the media centre for all the activities that happen in our community. It is our job to document the world around us, as it happens. We film or record everything – from football grand finals, to cultural ceremonies, school graduations, and old people singing and telling stories. We are often commissioned to make films and documentaries for media partners such as the ABC and NITV, and we get paid for this work. When we started out, there were only a few of us working on the ground, but now we have a staff of ten people working with us. There are two Yolngu cultural advisors, a project manager, and a pool of Yolngu trainers, translators, and technicians working under a Yolngu Board.

Another important part of our work is travelling to museums and galleries across Australia, and overseas so we can see their collections. We have been through all the major museums and galleries across Australia, helping their staff refine their collections and looking for material for ours. Many Australian museums have large photo archives of “unknown” Aboriginal people. One of our jobs has been to help the museums “name” the people. When we find photos, sound and film footage from our communities we ask the museum for a copy and then we add it to The Mulka Project. We really enjoy this two-way learning, where we work with the museum teams to improve their knowledge and we get to learn more about collections.

The ways in which The Mulka Project connects with our communities has changed as we’ve grown, which is one of the most exciting things for us. When we started out it was difficult for us to accommodate school groups because we had no space and only three computers. Now we have more space and thirteen computers so teachers from the school bring their students to us for lessons and to use the archive for research. Also, now that we have more resources, we can work with the homeland communities across north-east Arnhem Land. We have given many of the homelands a computer and a hard drive, which has our archive on it, so they don’t have to come in to Yirrkala to access it. Homeland people can document their activities and add to their hard drive, which we can copy, so our archive is always growing.

Homeland people also ask us to come out and make films, so we get to teach new skills, share ideas, and give everyone the chance to be involved. Another really exciting part of our work is getting to reunite families with archive material of their relatives and ancestors from the past. It can be a very powerful and emotional experience when a person sees a photo or film footage, or hears sound recoding, of a deceased family member. Having a digital archive means we are always connecting families, and our people are passing messages to each other, and the wider world, across time.

Wukun Wanambi is an award-winning artist. He won the Telstra National Aboriginal & Torres Strait Islander Art Award for Bark Painting in 1998 and was highly commended in the 3D category in 2003. He is a cultural director of The Mulka Project. Ishmael Marika is an award-winning filmmaker and artist. He is one of the senior film directors at The Mulka Project. | Buku Larrngay Mulka Art Centre, www.yirrkala.com. 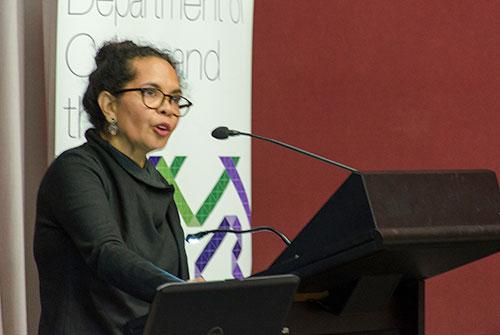