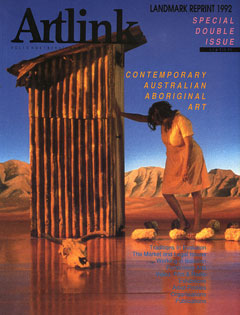 Howard Morphy   The sort of work you have been doing these past ten years has put Ramingining on the map, or at least on the map of Australian art sites: through the development of specialist exhibitions, through establishing good relations with major galleries and ensuring that works get into those galleries. Were you consciously looking for ways to establish an identity and a market for Ramingining art when you initially arrived here? And, whether you were or not, was there some point at which you felt that a market did open up and you felt that times had changed and that the community had been recognised?

Djon Mundine  Well, I thought that the market was there, and that the change was already in some stage of happening. The people at Ramingining or the art at Ramingining had already been recognised a few years before I came here. The first Aboriginal art pieces to appear at the Biennale of Sydney in 1979 were from here. But their inclusion was – from my point of view – more of a non-political, very non-analytical inclusion. Politically, it said things, “yes this was very beautiful art in the aesthetic sense, and it was contemporary Australian art” and that was a big statement to make. But beyond that it didn’t say much more.

And it was certainly operating at the level of the Grandmasters of art that people have always operated at in regards to religion, culture and used this concept of Dreamtime religion that people have always talked about, which is this very grey area that you can push things off into and you don’t have to explain anything. Does that make sense?

HM  Yes it does. But I would have thought that one of the things that you have been doing through your thematic exhibitions is indirectly making Ramingining art, art in precisely this European sense as magnificent paintings to be looked at on the walls of the Australian National Gallery. Until the late 1970s Aboriginal art wasn’t exhibited as great masterpieces of world art at any of the major galleries.

DM  This is true, but I was saying that the wheels were already in motion with much of that. I think that the debate about Western Desert art was turning in favour of the Aboriginal artists at about that time in the late 1970s, and certainly had turned right around at the beginning of the 1980s, which then had repercussions with the Australian National Gallery taking a more positive view of Aboriginal art and that it should be included in their collections. This caused many other people to fall into line, and gradually people have. That process just happened to coincide with a lot of the things I have been doing. I am not trying to be modest – it just happens that I came along at a good time as far as that goes.

I think that possibly now the art world, as far as Aboriginal art goes, is starting to stagnate. Or, rather, the creativity in some areas is starting to stagnate in the sense that it’s reached a level where they don’t know where to go next – and the danger that I was talking about before of mass-producing pieces of work of a certain type is just being reached at a higher level, not producing $20 tourist items but producing $10,000 tourist items.

I certainly think that there is a danger of that with some types of Aboriginal art, and I think that they want to be very careful and look for ways to get around that. I believe that thematic exhibitions do that, they put things into a context and put art down to the tin tacks where it can be analysed in a really basic way.

HM  In a sense, you’re saying that your aim from the beginning was to show the art in its full complexity and that was much more your motivation than the promotion of art for the sake of increasing its market value.

DM  I saw myself not as a commercial person. It just happened to be that there was a commercial turning point in the art history of Australia and art appreciation, and that it helped to be there and doing these things. But I certainly wasn’t thinking “Ah! I can sell these works for twice as much because they’re in this context”. The educational part of it, the cross-cultural reference part of it, was more important to me than the money – the money just happened to be a spin-off. People appreciated those points and the aspects of exhibitions and realised that they didn’t mind paying for those extra things.

HM  As an Aboriginal person from New South Wales, did you encounter any difficulties gaining acceptance by communities in Arnhem Land, initially, or …

On the question of Aboriginality, I basically felt that I knew who I was and from an historical perspective I knew who I was. And it didn’t overly worry me. I just accept it as that, and say that there are different stages of historical process. And you accept that. But I was never very backward in telling people that this is where I live and that this is my family background, and I am an Aboriginal person from NSW.

Very often, I have had some amazing statements of moral support. And people seem to have – the major artists at least, if not many more people – a very positive perspective on Aboriginals from other states, in NSW and Victoria and so on, who aren’t still practising traditional religion.

HM  Have you seen this as something that has increased since you have been there?

And, in that way, I try to make people more aware of Aboriginal history in Australia – because people here are still in a very closed society in many ways. I wouldn’t be so bold as to say that people are incredibly more aware because of anything that I have done. People are more aware because of the more general communication channels with the outside world and political movements that have happened in recent years that have affected them and I think that that has had a greater effect on the community than I have.

HM  Do you think it is easier for an Aboriginal arts and craft adviser to take on this role of mediating between the people of Ramingining and Aboriginal people down south.

DM  Well it does in some ways. Some people are suspicious of what I am, and what I am doing because I am not at all that well-known in NSW and Victoria, or wherever. But it certainly does help, and also it means I am at least aware of lots of other groups or organisations that may be interested in coming to the exhibition. In many instances the art gallery where we are holding the exhibition would not have had any Aboriginal contact or very little before we have had that exhibition – certainly not locally I mean.

HM  Do you think it likely or desirable that craft advisers should be drawn from members of the local art-producing community rather than outside the community? Or, do you think that, in some ways, in the present historical conditions, an outsider can perform the job better, more effectively, more easily?

DM  I couldn’t say. People from the local community of Ramingining have been put in positions before, but it has to be a very special person. Because, in actual fact, the position isn’t very well paid. It’s very underpaid, it’s very demanding and very unusual in terms of conditions of employment (there is absolutely no guarantee of any conditions of employment).

So a local person would have to be very idealistic – it has to be a very idealistic person anyway. And, in fact, and I have said this somewhere else, it is actually run on bloody white slave labour. In the art world in general in the white Australian art world, people don’t expect to get massive salaries, they don’t expect to get incredible kudos, or anything, and do things for the love of art.

A local Aboriginal person may feel that they are being ripped off in the position – and because they are a local person, they are certainly under more pressures. The pressures are pretty hard on a white adviser living within the community, and if you are a local person it may be too much. In many instances, I have seen that it has been too much on that person, as regards to pricing and favouring particular art groups within the community.

People quite often say that that’s what we are aiming for, and they sell that as a policy. But I don’t necessarily think that’s a correct policy, and it has to be judged in each instance, and in relation to the people involved.

HM  Do you think it’s desirable in the long term that craft advisers positions should be Aboriginalised, or is it more to do with their qualifications for the job?

DM  Well, the qualifications are pretty open-ended. And people with some of the strangest qualifications seem to end up being good art advisers. While other people with incredibly good formal qualifications stuff up the art centre for years, through mismanagement. So, I think the policy for Aboriginalisation is something you should aim for, but you still don’t want to put someone in the position who is going to stuff it up. The most dangerous thing about it all is that you are dealing with Aboriginal culture, which is under a lot of pressure to change dramatically for the worse, and it’s a very critical sort of time.

Djon Mundine is the art advisor at Bulábula Arts, Ramingining.

This interview has been produced with the assistance of Luke Taylor, Institute of Aboriginal Studies, Canberra.

Contemplating the work of Lin Onus the artist, the arts administrator and the panel beating mechanic.

"In January 1989, I attended the second national Black Playwrights conference. I arrived at this conference feeling very unsure and insecure with nine small scenes which I had hoped would turn in to a play."

Looks at the art practice of Victorian artist Gayle Maddigan.

From Yuendumu to Paris

Explores a historic trip for six traditional artists from Australia for the exhibition 'Magicians of the Earth'. This global overview was created to "reveal the force of communication" and was true to its title.

Looks at the art practice of Wanjidari.

Birukmarri is an exhibition gallery and retail outlet with a commitment to the professional retailing of Aboriginal art.

The Bicentenary and Beyond: Recent Developments in Aboriginal Printmaking

The period of 1986 - 1989 has been epoch making for Aboriginal printmaking, not necessarily because of an improvement in the quality of the prints produced during that time but because Aboriginal prints in forums broadly motivated by the centenary has allowed them to receive the recognition they deserve.

Until recently, Pitjantjatjara communities had very limited acces to or influence from mainstream media, communications, technology and information systems. English is still a foreign language to most of the population and functional levels of literacy are very low.

Interview with Norah Nelson and Frank Bronson of Warlukurlangu Artists of Yuendumu prior to their first solo exhibition 'Our Dreaming' at the Dreamtime Gallery Perth Western Australia 18 February - 10 March 1990 Perth Festival.

Examines the paintings of Les Griggs.