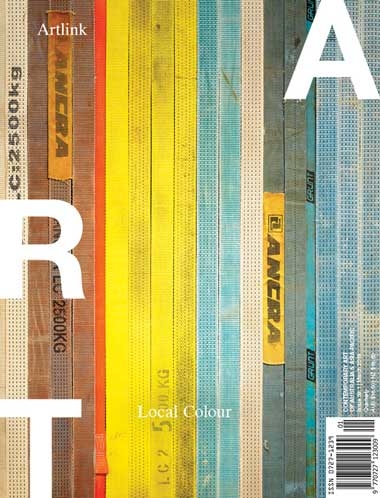 I find it harder and harder every day to live up to my blue china.

As an aesthete Wilde surrounded himself with beautiful objects. This epigram from his Oxford days paid tribute to and satirised the Victorian craze for the exotic. At Oxford University Wilde was introduced to the culture of aesthetes by art critic and philanthropist John Ruskin whose writings on craft also influenced William Morris.

Blue and white ceramics had already, by the late-eighteenth century, reached a kind of aesthetic pinnacle, their everyday (in)visibility belying their quiet subversion. There is a long history of political activism in ceramics dating from at least 1787 when Josiah Wedgewood made a number of cameos dealing with the emancipation of slavery. Otherwise, an establishment figure, Wedgewood is one of a long line of practitioners that have inserted themselves into the narrative that continues in the work of contemporary artists like Grayson Perry, whose background in performance art and painting, ultimately drew him to ceramics: “because the pot offered a banal, seemingly harmless cultural icon that, because of its very innocence, could be used as a kind of Trojan horse to undertake narrative and allegorical excursions under the skin of British respectability.”[1]

The efficacy of politics in art is questionable (and forever argued), but there are many artists working in the area, including ceramicists like Carol McNicoll, who began making political work out of a sense of powerlessness. As she writes, “I always felt that art wasn’t really an appropriate medium for saying political things. I always thought there were better ways of expressing yourself politically. Now that I realise that actually one doesn’t have a voice certainly in this country (England), there is no political party that I can support. We will go to war with Iraq in my name, whether I want us to or not. So I started to think I may as well say it on pots!”[2]

My own work corresponds to similar ideas of function: that is, how an object works or operates in its usage as opposed to a modernist idea of pared back “form following function”. My interest in imbuing functional pots with narrative content is to add another layer of function or engagement. A pot makes little demand on the user. It is an unlikely carrier of meaning. Pots are also three-dimensional which provides the potential to illustrate a narrative text or idea that unfolds as you make your way around it’s surface. This can be unveiled over years of use.

After dabbling with cobalt in the early years of my practice, I didn’t really see its potential until I was invited to be a part of a group exhibition titled The Australian Willow Pattern curated by Stephen Bowers at the Jam Factory in 1991. The work I made entitled Warrigal Wearing Willow featured a dingo atop a base decorated with a depiction of the Azaria Chamberlain story. This is when I first realised that dark narratives could be hidden in the familiar blue and white patterning.

Up to this point I had been incorporating a fairly wide palette in my decorating of ceramic objects. Once I started painting with cobalt oxide I enjoyed the limitations of the monochrome palette which depended on tone and shadow and was drawn to the history of the blue and white oeuvre. The aesthetics of blue had spread from its discovery in Kashan in the Middle East throughout China, Japan and Europe, undergoing modifications as it spread. The valued pigment called Mohammedan Blue provided a deep and varied hue that was ideal for graphic representation. It was also an aesthetic that didn’t take itself too seriously. There was no sense of borrowing cultural property in the way that studio potters had been “willy nilly” dipping heavily into a heady blend of “wabi-sabi” and mid-century aesthetics, both of which I was drawn to but felt uncomfortable with.

The blue and white tradition and developments within it such as the Willow Pattern made for an oeuvre that was wide open to further bastardisation and was unaligned with ascetic modernist notions of taste. After becoming particularly interested in the Willow Pattern crockery which was produced in the Industrial Revolution, I began suffusing soft social commentary into the original pattern reworked as more obviously hand-made and decorated plates and crockery. The conventional willow pattern design operates on a number of levels. Its colour and schema are familiar.

The landscape depicted in the pattern although flattened and stylised is serene, almost Arcadian. The underlying narrative, an ambiguous story of love, deceit and murder, undermines the idyllic nature of the pattern. As social commentary it also permits unexpected interventions. The inauthenticity of the pattern, its faux-Asian otherness and its subsequent adoption into the dining rooms and kitchens of the Western world is fertile source material. As an aspirational dining item of the period the blue Willow dinner service brings with it more than a whiff of the colonial establishment and the inheritance of old Europe.

Eventually the flat cartoon images of the Willow Pattern were reimagined and configured as three dimensional tableaux in which the figurines, freed from the confines of this cartoon landscape, could engage in current events including the torture incidents at Abu Graheb and the infamous and erroneous children overboard incident. These works were part of a larger tableau based on the seventeenth century table-top groupings of figurines which were brought out at dessert as conversation pieces. Boat of Women was one of the works made for the tableau which I remade a number of times. One of these works was eventually donated to the Migration Museum in Adelaide.

The women in the boat were based on images of “moon-faced women” from a thirteenth-century plate in the Brooklyn Museum called Bowl of Reflections. (It was not blue and white.) I reimagined the figures in three dimensions, decorated them with cobalt oxide and built them a boat. The piece is a reflection not only on generations of migrants as “boat people” but more specifically the “children overboard” case of the Norwegian cargo ship MV Tampa refused entry to Australian waters after rescuing 438 people, mostly Afghan asylum seekers, from a distressed Indonesian fishing boat 140 kilometres northwest of Christmas Island.

I have remade the boat of women a number of times over the last ten years. The moon-faced women have become part of my visual lexicon. In my most recent work, one of the 2018 South Australian Artist Commissions for ACE Open, they appeared on a number of decorated platters and tiles that covered the walls and floor of the room. I liked the way the blue and white colour scheme served to camouflage or sanitise the imagery, echoing a decorative Dutch interior. The moon-faced women were reimagined as homeless or displaced and the blue and white rendering suggested Delft, Chinese, English, Spanish or even Portuguese interiors.

An interesting aspect of ceramics is its longevity as a carrier of information in both its physical makeup and its decorative content. The decoration on ceramics describes the culture it came from both in terms of form and narrative content. The images we carry arond from mythology are largely derived from the surfaces of pottery. Of course, this is now largely anachronistic but the impermanence of digital information places ceramics in an interesting position as an archaeological carrier of information. One wonders what would be discerned about 2019 from the surface of one of my blue and white jars unearthed in the distant future.

Gerry Wedd: Kitschen Man concludes its national tour, organised by the JamFactory, at Coffs Harbour Regional Gallery (8 March – 4 May), where Gerry is also exhibiting in Ripped Off, a group exhibition responding to the work of pioneering surf photographer John Wiztig. 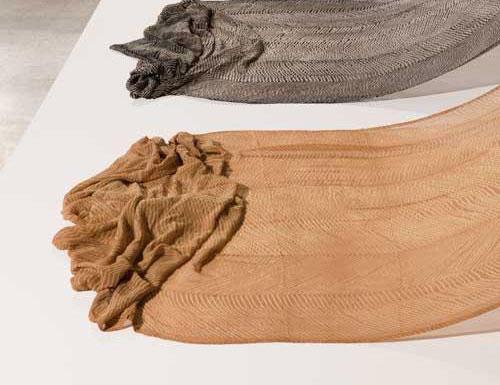 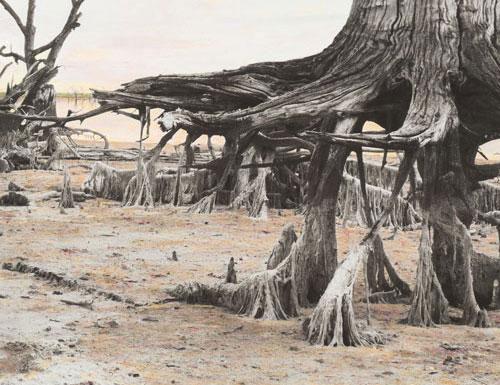 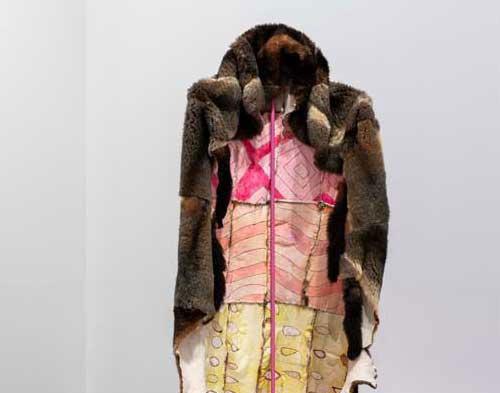 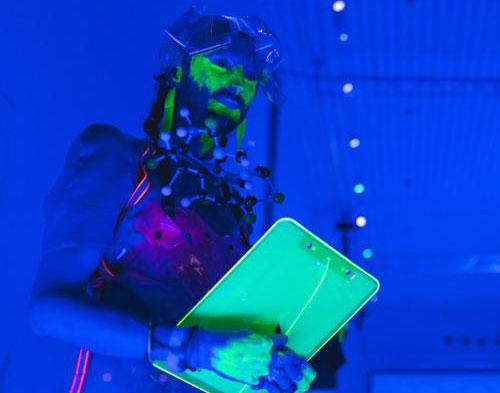 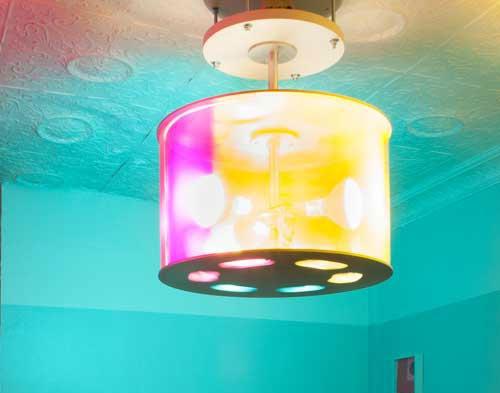