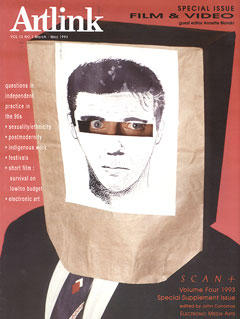 John Hughes independent documentary film on Walter Benjamin One Way Street was screened on ABC television in December 1992, the centenary year of Benjamin's birth. The film has been released to festival audiences in the US and Europe and will theatrical release in Sydney and Melbourne in 1993. Here John Hughe slips into pause and explores an opening on certain scenes.

Transformation of the Real: Constantine Koukias and Ann Wulff

Over 12 days in November 1992, the Melbourne based Modern Image Makers Association (MIMA) held the third Experimenta presenting nearly 200 works of film, video, installation and performance. It included work from Germany, Japan, England and the USA, thus providing an opportunity to assess the current state of 'avant garde' practice and discourse.

Tracey Moffatt offers her personal insights on the making of 'Bedevil' made in 1992 with Film Finance Corporation Trust funds. Due for release in 1993.

Redemptive Moments Through Utter Despair: The Films of Brian McKenzie

Expressionism and modernism. Two old fashioned words in these days of post modernism.

Surely one of the powers of cinema is the aesthetic redemption of everyday reality, a poetics in motion that can distill and energise mundane objects, be they tiles on a kitchen wall, the fluorescent facade of an airport terminal, a luminously white T-shirt being twisted and tugged or the compact shapeliness of Y-fronts on a young body emerging from bed.

The End of Independence? Women's Film and Video in the 1990s

Independent cinema may have been diverse in form, but its practitioners had in common a position of difference and marginality, working outside the mainstream and in opposition to it.

A Tale of Reproduction and Dependency

What is the effect on film when the maker's background is utterly different from the culture in which he now works. Anna Epstein talked to a film-maker who brings fresh vision to the Australian film industry.

TV Eye: Cinema in the Age of Video

In 1993 in Australia less than 2 per cent of the population attends the cinema yet over 90 percent of households own a VCR....

"I am not a TV show, this is not a TV show." These are the oft-spoken words of Tony Tjamu, Chairperson of the Mutitjulu Community at Uluru (Ayers Rock) in the Pitjantjatjara Lands of Central Australia. Their repetition reveals something of the exasperation born of the visibility of being Aboriginal in a predominantly white Australia.

Looks at 3 Australian films: Romper Stomper Night Out and Resonance each of which brings masculinity, sexuality and violence together.

Lesbians do not exist in mainstream Australian cinema. Apart from a brief sequence representing youthful lesbian desire in 'The Getting of Wisdom (1977)' and the undercurrent of adolescent homoeroticism in 'Picnic at Hanging Rock (1975)' Australian cinema has remained mute - perhaps dumbstruck might be a more appropriate term - in relation to the issue of desire between women.