Scene from the making of Collisions. Photo: Piers Mussared

Shaping the globally‑inflected histories of today are endless encounters between worlds. They can be seen across Australia in the exchanges between Aboriginal and settler groups and they paint myriad stories of who we are—some told, many untold. These cross‑cultural collisions are striking motifs for artists and storytellers, running like veins through our collective body, further amplified as the last generation of pre- and first‑contact Aboriginal people pass away. Not only is there a mutual desire to express and to hear these stories but there is an urgency to archive them for the world.

Collisions is the third moving image piece by Sydney‑based artist Lynette Wallworth made in close consultation with the Martu people in the Pilbara. Immersion in Martu Country has been a hallmark of these carefully negotiated works, but in Collisions the audience—or guests, to better describe the viewing experience—are transported into the heartlands of Nyarri Nyarri Morgan’s Western Desert homeland by the most cutting edge technology: interactive virtual reality (VR).

Collisions delivers a history lesson, drawing tension from its double‑narrative and blurring of filmic genres: oral history, documentary, animation and sci‑fi drama. But this is no fantasy, as Nyarri’s intimate first‑hand account reveals. Walking a trade route through Maralinga in the 1950s as a young man, he witnessed one of modernity’s most devastating inventions: an atomic bomb blast, one of seven carried out in the region between 1956 and 1963.

In Collisions this key event delivers an apocalyptic finale to rival an intergalactic Hollywood blockbuster, the sky exploding in a radiant cloud and disintegrating into deadly black mist, recreating Nyarri’s embodied perspective. Waterholes boil and kangaroos are blown from ground zero. When Nyarri and his travelling companions found themselves amidst this spectacle beyond imagining, animals falling at their feet, they assumed it was an event from the tjukurrpa (Dreaming), “a gift to us of easy hunting” as Nyarri puts it. But the Martu quickly learned the cost of eating the radioactive‑contaminated bush foods as they suffered terrible sickness and death, a fate shared by Aboriginal populations across inland Australia.

Knowing about the making of Collisions contributes to the affective aura of the work. The rapport between artist and subject/narrator creates a seamless transition between past and present, between animation and camera vision, but as with all highly successful works, what appears effortless is underpinned by immense labour and love: long‑term relationships, comprehensive storyline planning, managing logistics in remote locations and working with emerging technologies across different languages.

When Wallworth introduced Nyarri to the VR camera, he was quick to grasp its potential to document his story‑in‑place; here was a tool with “sixteen eyes” and “four ears”. He understood its capacity to reveal restricted sites when mounted on a drone. Together he and Wallworth directed the vision to ultimate effect, presenting the physicality of Country to such a degree that even the smell of smoke seems to linger as evidence of the practice of mosaic burning integral to land management.

There is no sidestepping the enchanting effect of VR, still a novelty experience for most audiences. Grafted into an alternate reality, immediate surroundings disappear. Wearing headphones and viewing goggles the corporeal sensation is giddying, like tearing through spinifex country on the back of a ute, in which the instinctive fear of falling becomes part of the thrill. Tilt your head and the world tilts with you. Look down and red sand greets you, a close encounter that opens a four‑dimensional entry point into the world and ways of the Martu.

Launched at the World Economic Forum in Davos, Switzerland and the Sundance Film Festival before an extensive program of international and Australian venues, the ultimate ambition of Collisions—and Nyarri’s dream—was to make an impact on public policy and to broadcast its message to world leaders.[1]But there is a ready artworld audience too. The first VR film to be shown at New York’s Museum of Modern Art, the environmental and political timbre of Nyarri’s Indigenous voice writ‑large is precisely what gives contemporary art its critical form.

Wallworth is driven by the wish to communicate difficult truths through evocative means, as in her recent climate change projection Coral: Rekindling Venus and the film Tender, an expose of the corporatised, multinational funeral industry. In 1999, working on the Robert Hughes television series, she first researched the Maralinga tests. In her subsequent key role in the Desert Oaks Painting Project on Maralinga Tjarutja lands in 2002 the legacy of British atomic testing hit home, ultimately planting the seed for Collisions.[2]

The Martu later invited Wallworth to work on the intercultural, interdisciplinary project We Don’t Need a Map, which generated the first collaborative film‑piece, Still Walking Country, followed by Always Walking Country commissioned for Dark Heart, the 2014 Adelaide Biennial of Australian Art. It was painter and intercultural facilitator Ngalangka Nola Taylor who insisted that Wallworth was introduced to her husband Nyarri. Four years later when Wallworth saw VR she knew this was the means to share his extraordinary story.

In the interests of intergenerational custodianship, Nola and Nyarri’s grandson Curtis Taylor assisted as translator, co‑narrator and sound consultant on the project, attending Skywalker Sound in California for the final weeks of post- production. Originally developed by George Lucas, the world‑class recording studio has a comprehensive archive of sound bites now inclusive of Taylor’s audio mimicry of dying kangaroos gasping for breath. A multimedia artist and filmmaker in his own right, Taylor is an articulate multilingual diplomat for Indigenous issues who endorses cross‑cultural collaboration and new technologies as powerful tools for connecting communities and reaching global audiences.[3]

The full extent of the Maralinga experiment perpetuated on Aboriginal people and their land is still little known. Like Collisions, Black Mist, Burnt Country, an exhibition currently touring of Australia, is a gesture in redressing this blind spot.[4] Writer Frank Walker’s “chilling expose” published in 2014 confirms that “the agenda of the British … was to turn the whole of Australia into one giant nuclear laboratory. They wanted to use the Australian population as human guinea pigs for decades to come.”[5] While the explosive core of Collisions relates directly to Australia’s Cold War history, it also reifies the literal and psychological fallout of atomic testing and flags continued nuclear threats which are not confined to the past. As we stagger in response to the pyrotechnics in Collisions, the South Australian government is proposing to store high‑level radioactive waste above ground in the desert for over 100 years.

The contemporary Aboriginal painting movement, widely recognised as a form of symbolic land tenure, and art conceived in ever‑more collaborative and spectacular forms continues to play a part in land rights and land management. Nevertheless, conflicts over land use and protection of natural resources in an age of Native Title continues for the Martu. In 2012, after lengthy negotiations, they signed the Kintyre Mining Development Indigenous Land Usage Agreement with Cameco to allow uranium mining in their country. But the Martu were not unanimous in their support—or even clear in their understanding—of the agreement, publicly voicing their concerns.[6] The Martu speak from lived experience and theirs is an inheritance shared by the world.

Una Rey is an arts writer, curator and painter who lectures in art history at the University of Newcastle. 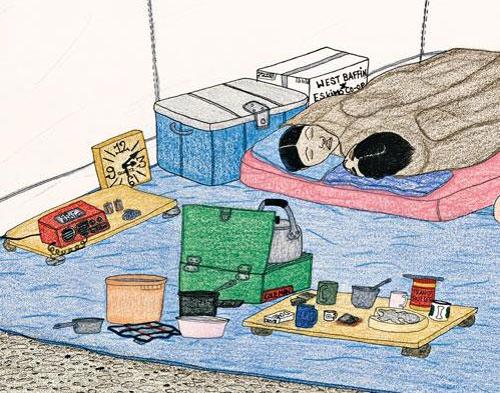 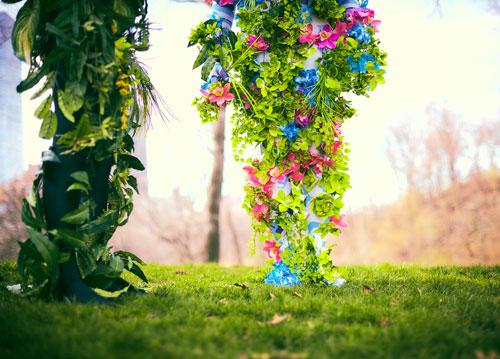 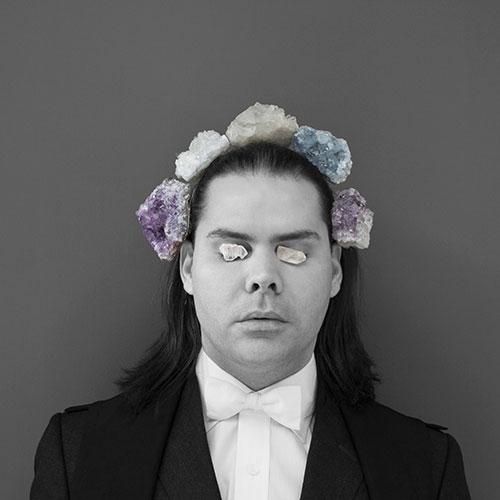 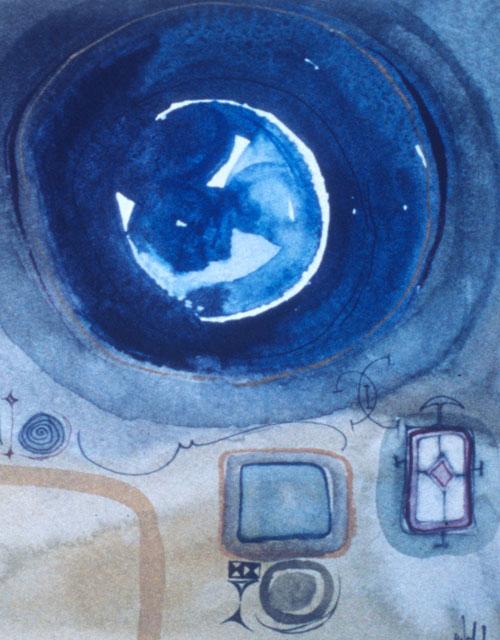 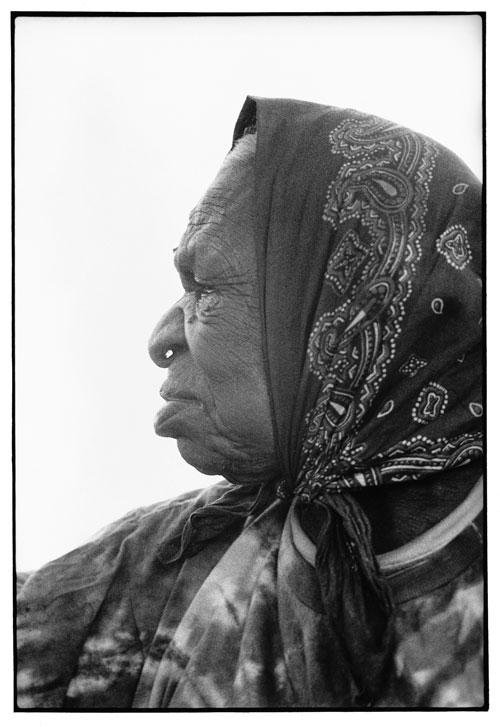 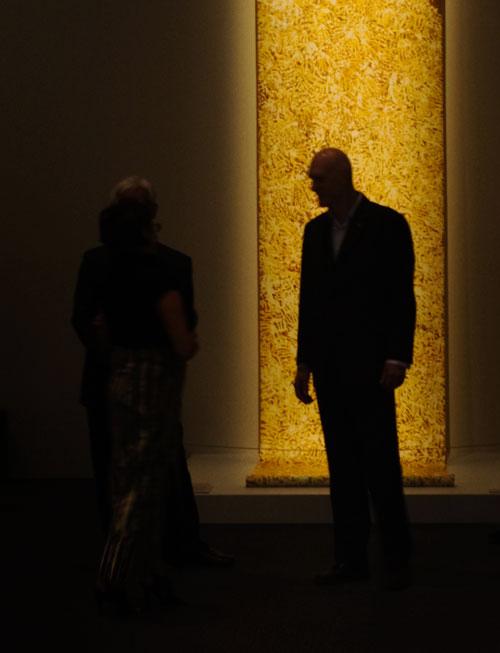