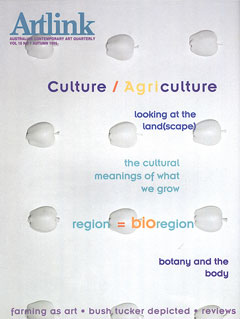 To title an exhibition Garden of Earthly Delights is to invite comparison with Medieval Dutch painter Jeroen Anthoniszoon van Aken— better known as Hieronymus Bosch. Fiona Hall’s exhibition of this name was toured in 1994 by the National Gallery of Australia. Both Bosch’s triptych and Fiona Hall’s Paradisus Terrestris (1989–90)[1] attract instant attention and fascinate in detail but Bosch’s Garden of Eden is a fantastic wilderness while Hall’s is a botanical garden where nature is classified, arranged and labelled.

Bosch enjoyed the drolleries of the 14th-century manuscripts. As one of the first well-read artists able to benefit from a literate and well-read audience he could experiment with the translation of verbal imagery, secure in the knowledge that his audience could understand the coded references. Fiona Hall is also well-read, so to fully appreciate the Paradisus Terrrestris you require more than a passing acquaintance with Pliny the Elder’s Natural History: a Selection, John Parkinson’s Paradisus in Sole: Paradisus Terrestris and some postmodern literary theory. Without these only the punning verbal imagery is accessible.

Bosch knew and used the coded languages of his time to convey his messages. Hall in our less chivalric age is more “full-frontal.” The allusions are generally less subtle, intended as they are for an audience less accustomed to reading symbolic codes. For instance, in Bosch’s central panel, a man’s hands reach for a luscious berry balanced between his legs. The berry is a common metaphor for sensual indulgence. From it a nightingale and a bird with a curving beak – symbolic of the devil – raise their heads. The cameo alludes to the temptations of the flesh, encouraged by the devil. The hands reach out to “pluck fruit” or “make the nightingale sing” as Bocaccio’s storyteller so delicately put it in the fourteenth-century Decameron.[3]

Hall’s work is more explicit and, by being more specific, is actually less erotic. For instance, the blackboy: (Xanthorrhoea thorntonii) is translated as a large and erect member – presumably of a black male. Old man banksia (Banksia serrata) is covered with the large nuts of the species. The sardine can also contains large “nuts” hanging beside a “trunk”. Nonetheless, Hall does use allusion. We are expected to be cognisant with the aphrodisiac qualities of celery or the liberating effects of cannabis – “The sensuous attributes of the plants above.”[4] Hall has an excellent grasp of anatomy and is skilled in manipulating aluminium cans into delicate bas-relief.[5]

For her earthly paradise, Hall has formed the metal into lush miniatures of the original plants. She has ordered them, labelled them and displays them in a neat row – some twenty-three species chosen for their erotic connotations or the play upon words available to complement the imagery. A laden grapefruit: (citrus paradisus) is paired with swelling breasts cupped in hands. The succulent century plant: (Agave Americana) is paired with a penis being tempted by succulence. Quite a garden to cultivate! Ripe fruits stand for sex and reproduction. Bosch’s central panel is ripe with fecundity – moist, rotten-ripe. Echoes of this also appear in Hall’s garden. She gives us the passionfruit, the banana, the grapefruit, the banksia. The banana is definitely past its prime!

His plants are hybrids, hers are not. Even so, some plants have similar forms. Bosch’s Dragon Tree in the Garden of Eden panel is a cross between a pandanus palm and baobab tree – both of which feature in Hall’s work. In the centre of Bosch’s garden is The Fountain of Youth defining lust as the passion which lies at the heart of all evils. Lust features heavily in Hall’s garden too. The central panel is the passionfruit: (Passiflora edulis) in which a hand caresses a vulva. On one side the screwpine: (Pandanus kirkii) is cameoed as a pair of hands searching like the mangrove’s roots for moisture and on the other is pear (espaliered): (Pyrus) – a female trunk and torso impaled on a penis. Bosch has a mollusc shell shutting on a pair of lovers[6] forever trapping them in their pleasure. Hall, too, has her botanic version of this – the venus fly trap: (Dionaea muscipula) with its clammy leaves waiting to snap shut on unwitting prey.

Bosch’s inference of sensuality trapping souls is translated into more direct physical entrapment of a man – the female muscles snapping shut on the penis – the laviscious lips of a woman’s vulva are ready and waiting to close tightly on and consume that which enters. In Bosch, the Fountain of Worldly Allure in the middle of the Pond of Lust contains an underworld of adulterers. In a peephole a man’s naked bottom and a hand reaching for a woman’s genitals are revealed Peering at the sardine tins where similar glimpses are exposed the teasing questions crowd in. Are the spikes on the Monkey Puzzle alluding to the horns of cuckoldry? Is it the prickle of conscience or does the sap have some secret property as the (Araucaria Araucana) tree is paired somewhat provocatively with a hand stroking a crumpled penis?

Bosch and Hall are for those who have cultivated their literary garden. First find your Paradisys in Sole! for, as the exhibition literature says, “we must look beyond superficial appearances and sensuous surfaces to discover meaning.” On the other hand we can, as Barthes said, separate pleasure from the sign and “de-semanticize the object (which does not mean de-symbolize it), give the sign a shock: let the sign fall like a shed skin. This shock is the very fruit of dialectical freedom.”[7]

Dorothy Erickson is an art historian, critic and jeweller, based in Perth. She is a principal of Erickson and Taylor, Art, Design and Heritage consultants and historians.

"I used to think there was no link between farming and art...well, most art reflects the environment in which it is produced and the artist who produces it..."

Husbandry and the Coporate Collection

Rice on the Terrace

The artist grew up in Baguio, which looks to be quite close to Ifugao on the map, and although I was taught that the rice terraces of this region of the Philippines were the eighth wonder of the world it was many years before he was able to see them.

Agriculture and culture go back a long way. The fact that they actually meet and marry in the word 'cultivation' makes this clear....when it comes to direct experience, city and country are more distinct in Australia than in many countries.

Rene Boutin: An Artist and His Garden

New Caledonia has become the first Pacific nation to hold a Biennale of Contemporary Visual Art. Lucienne Fontannaz travelled to Noumea to interview artist Rene Boutin and discovered an artist who takes more than the gallery and his studio as his milieu.

Plant a Yam, Paint a Yam

Explores the relationship between food and its representation in the northeast of Arnhem Land in the Northern Territory. Remember, dangerous themes make dangerous art.

A Piece of EcoCity

The Halifax EcoCity Project is not just the seed for a future ecological Adelaide; it is the embodiment of a new paradigm that is sweeping the planet.