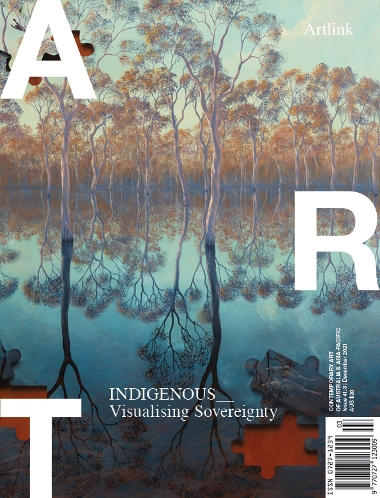 I don’t remember much about the Kumarangk incident, I was a child when it began and a teenager when it ended. Some things do come to mind like sitting around my grandmother’s dining room table, where all Aboriginal family business is conducted. In attendance was my mother and other female relatives, they sipped tea and adsorbed the news from the south, while us kids hung around the edges. Without understanding the nuances, I did recognise this was serious business, a lot was at stake. It’s in these conversations, led by women, where my understanding and weariness of government, corporations and media representation was influenced, especially in relation to our Aboriginality.

Like all Aboriginal Nations, we Ngarrindjeri people have had to face inexcusable amounts of suffering and loss following the British invasion and settlement of our lands. We have found ourselves inaudible as we speak out against this violence. The building of the bridge to Kumarangk (Hindmarsh Island) in 2001 was a great example of this, as it ignited a national firestorm and saw Ngarrindjeri culture and beliefs dragged before a white court to defend its validity. The Kumarangk controversy through the 1990s remains a crucial point in so-called Australia’s recent history and its relationships between the nation state and First Nations people.

The bridge linking the mainland to Kumarangk had been proposed in the 1980s, to help boost the financial status and expansion of the marina that had been partially built on Kumarangk. Ngarrinjeri women opposed the building of the bridge, fearing it and future development would destroy the environmental landscape and the sacred sites that the island is home to. The women were dragged into a muddy and arduous legal process that bounced between state and federal governments, a royal commission and court appeals. A visceral attack on our spiritual beliefs, led by the government, played out and was mocked in the media, but these women remain steadfast in their stance—Kumarangk is home to secret women’s business. ‘“This is not just any island”, sang Dot Shaw, “it belongs to the Ngarrindjeri mi:mini.”’[2]

I am blessed that I can trace one line of my Aboriginality through a continuous line of women. My mother, my grandmother, my great-grandmother and her mother and her mother. One strong Blak woman, right after the other. I got to meet my great-grandmother Nanna Iris, who was known for her jet-black curls, bright red lipstick and for lighting a cigarette with the one she was just about to butt out. All of her children were stolen from her, including my grandmother Margaret Woods-Brusnahan. They didn’t meet again until Nanna was sixteen, this was the time my grandmother was released from the orphanage, no longer under the control of the government. She returned to the safety that could only be found in the arms of other Ngarrindjeri women. This included her older sister Aunty Shirley who took her back to Raukkan to reunite her with their family.

Since the proposal for the bridge, Ngarrindjeri women and people have stood in opposition to it, clearly stating that this was a sacred site. This was met with false claims that the woman were lying. Over several years of legal proceedings and change of governments, the bridge was prevented from being built.

In 1995, the Hindmarsh Island Royal Commission was called, aimed to rule on the legitimacy of the claims. Aunty Sandra Saunders was there, alongside other sisters including Aunty Doreen Katinyeri, Aunty Veronica Brodie, Aunty Ellen Trevorrow and many more, a sisterhood of sovereignty. Aunty Sandra is a Ngarrindjeri artist and activist, a community organiser and former CEO of the Adelaide based Aboriginal Legal Rights Movement. Aunty Sandra told me she and her sisters ‘decided not to go to the Royal Commission and give evidence because they said it was an enquiry into their beliefs.’[3] This refusal was an act of defiance against what was an illegitimate government’s false authority over their sovereign rights. This ultimately cost the women, as the proceedings found them to be fabricating and lying about their cultural connections to the island. That said, five Ngarrindjeri women, known as ‘the dissident Aboriginal women’, did appear before the commission and testified against the cultural ties to the site. The worst thing that could have happened did happen: Ngarrindjeri culture was being dragged before yet another colonial construct, our culture was being judged by an outside body that had no legitimacy in doing so. Even worse, the findings were another weapon being used against the women.

Aunty Sandra created a series of artwork that capture the pivotal moments from the controversy which she titled The Hindmarsh Island Collection (exhibited as a series at Tandanya in 2004). ‘I was doing it [creating the collection] during all of this, it’s the only thing that saved me. I was so upset, so stressed, that the only way to get rid of the anger, I’d go home at night and paint. So I started doing little wire works and then I done more big canvases that were on hard boards. So throughout it, I just kept doing it and then after I did a few more to represent everything that had happened.’

While creating the collection was a means for selfcare, it was simultaneously an act of reclaiming narrative, a process of truth telling from the Ngarrindjeri women’s perspective. After being mislabelled as fabricators and liars, the women were inundated with a wave of criticism and ridicule from both local and national media. ‘It was a stressful time, lots of people got sick’, Aunty Sandra remembers, and speaks about the media coverage including one local newspaper at the time that published ‘a nasty article about me in it, so we use to go to the pub and pick up all the papers and chuck them in the fucking bin, so no one can read it and that was just a way of doing something, because it was so painful. It was a way of getting rid of the pain.’ The women did get some victory, which Aunty Sandra describes as ‘the most beautiful time, 21 August 2001, [when Justice John] von Doussa handed down his judgement and of course he said, in his opinion the instigator of the fabrications theory was “a whitefella who worked in the museum” and in his belief the women were credible in the evidence that they gave. It was a great decision.’ Outside the courthouse afterwards, Aunty Doreen Katinyeri reflected:

I feel happy. I wasn’t expecting everything to come our way. Oh I know that my children and my grandchildren and all my people’s grandchildren will now have an opportunity to learn their culture, respect it, and treat it as it is being handed down to them from other Ngarrindjeri people. And this is a victory for all Indigenous people in this country.[4]

Through this belated act of public correction, no longer could these women be called fabricators; the same legal system that had once labelled them frauds was now overturning the previous judgement. Aunty Sandra is proud of her activism; even today her voice carries the gusto of a fighter:

I hope firstly Aboriginal people understand why Ngarrindjeri Women stood up, to protect it, I hope it tells that story and they understand that. Because woman all over Australia did support Ngarrindjeri women in this. I hope that white fella’s take note and understand and that they read it.

Invasion has impacted our bodies, through murder, rape, incarceration, theft of children and illness. These impacts are driven by violence and a disregard for our humanity. But while there is collective experience of violence and colonisation for all Aboriginal people there is also gendered violence specifically targeting Aboriginal women. The invasion of land and body is the same thing, they are entwined with the same intent and purpose. A bridge built to Kumarangk, the cutting down of the sacred Djab Wurrung birthing tree or the incarceration of Yamatji woman Ms Dhu dying in custody, her calls for medical help ignored. These acts of violence all come from the same systemic outcome of the logic of settler colonialism, also known as Indigenous femicide.[5]

Historical attacks on Aboriginal women are well documented: murder, rape, forced and unpaid domestic work, forced marriage and unwanted pregnancies to colonisers. These are gendered attacks towards Aboriginal women and their fertility, and they continue today. Violence against Aboriginal women is at record highs, with a lack of health care services, continued removal of children and discrimination towards Aboriginal and LGBTIQ women face daily. As Amy McQuire writes: ‘If you think Aboriginal women have been silent, it’s only because you haven’t heard us, our voices now hoarse after decades of screaming into the abyss of Australia’s apathy.’[6] The colony’s persistence to cause harm to us has never ended, there are very few places where we can go as Aboriginal people and not have the colonial gaze over our bodies. That is why it must be recognised that the fight for land and justice is also a fight to reclaim autonomy of our bodies.

I remember my mum with my grandmother and two other Ngarrindjeri women sitting around, drinking tea and painting. It was like I was back at my grandmother’s table, except this time I had a seat there. They no longer talked about the bridge, but about their families and communities; the Ngarrindjeri tone and rhythm to their speech has similar patterns to elders who are sadly gone. Between sips of tea, they paint stories and landscapes from the Lower Murray and surrounding lakes. My mother was painting stones, the other two women were painting on canvas. My grandmother doesn’t want to paint: ‘I’m not a painter, I’m a writer’. So, I offer her pen and paper, but she refuses it, she hasn’t picked up a pen to write since her husband Pop Norman passed away. My Nanna has passed on now and so many of her cousins and sisters’ girls have gone too, strong women who faced so much in their lifetimes.

Many Ngarrindjeri people have continued to be vocal and reflective on the Kumarangk bridge controversy. What remains for us is a continued legacy of resistance and resilience. What remains for them is an ugly bridge. In 2002, the Alexandrina Council issued an apology to the Ngarrindjeri people, and 2010 the South Australian Government finally acknowledged that ‘secret women’s business’ was not fabricated.[7]  I am thankful to the Ngarrindjeri mi:minir, who through their profundity of Ngarrindjeri culture were able to stand and fight back. I am sorry that it came at such a personal cost for them, but I honour them for not giving up. These women deserve love, their names deserve respect, their voices need to be heard and believed.

Dominic Guerrera is a Ngarrindjeri, Kaurna and Italian person. He is an Aboriginal health educator, poet, podcaster and emerging curator. His work has featured in Granta magazine and Fine Print magazine and he was the recipient of the 2021 Oodgeroo Noonuccal Prize. Dominic is currently undertaking a Masters in Women’s and Gender Studies at Flinders University.