In its sixth year the National Graduate Exhibition at PICA fulfilled the expectancy of its title, Hatched by presenting a compelling array of work by emergent artists from across the nation. While the initiative to showcase graduate art is a worthy one, it can be a treacherous premise for an exhibition, given the potential for disparity of selections and inconceivable disjunctions of the work. Equally these characteristics can prove energising. The energy in Hatched, however, emanated from something less tangible; the harnessing of the tension and assertion in that transition zone between being a student and being an artist. Much of the work on show possessed the resolve and concomitant engagement which comes of committed studio practice.

A conservatism was apparent in an overall conformity to established means but the restraint and interpretative quality brought to their works by many of the graduates was refreshing. Thirteen institutions were represented by forty-three graduates. When considered as a cross-section of commonalities, the raising of consciousness dominated; other issues explored were surveillance, corporatism, intercultural transaction, consumerism and environmental fragility.

Cy O'Neill managed to tinge wryness with poignancy in an ensemble of gingham and emu feathers accompanied in the catalogue with a staged photograph and the question "Rushing furiously into the future.... where are we going and how expensive is the journey?" Minka Gillian raised not one but a multitude of questions with her parade of Effigies, their reference to Pacific Islander and African objects acknowledged. The figures, obsessively constructed from flax and hair, were paradoxical and perplexing in their atavism and their currency. Less burdened, although highly charged, were installations by Sam Collins, Philip Gamblen, Jade Ariel Oakley and Marcus Canning. These variously incorporated video, laser beams and wire, drawing, air, water, and sound. Jane Finlay found poetic perception in a mass of black plastic straws wedged into a doorway. Painting, photography, industrial design, printmaking, multi-media and ceramics were all exploited, confirming the breadth of materials and practices which contemporary students continue to embrace.

In an era of funding cuts and restructuring in the education sector it is reassuring that artists of distinction surface, although at what cost in personal and institutional terms we cannot know from the seamlessness of a graduate exhibition of select students. The gradual decline in the number of art schools participating in this annual exhibition has been attributed to the funding crisis. This is possible, if not through actual costs, through the comparative evaluation by management bodies of the means of best returns for outlay and the most relevant emphasis within overall operations. If this is the choice that is made then it is disappointing for aspiring artists and their schools not to have the opportunity for professional exposure in what has become a marker on the arts calendar.

You be the Chorus: Rites of Passage in a Virtual Art World

Imagine art without gatekeepers - no curators, no reviewers, no bureaurcrats. Emerging artists would no longer kowtow to the standards of a few curators in order to have their work seen. Audiences would no longer depend on the tastes of a select group of critics to determine which exhibition they should visit....the prospect of a transparent art world is in fact a mere extrapolation of current trends.

Plastic Newcastle - The Epicentre of Denial

Newcastle is already a post-industrial city and talk of culture as the defining feature of the coming economic profile of the city sustains an older myth. That is, that industrial and mining cities did not support high culture....

Looks at the work of three new artists working within the Boomalli Artist's Co-operative. Leonie Dennis, Shirley Amos and Cedric Talbot. Includes statements by the artists.

The work of Justene Williams and Tony Schwensen. William's photographs are taken spontaneously, and sometimes surreptitiously, with disposable cameras. Schwensen's installations combine paintings and sculptures to embody an idea of suburbia.

Setting the scene for interpretation of emerging art practice in the north involves thinking about what it is to be in geographical isolation from the major urban centres in Australia, a combined sense of alienation and freedom. Discussesartists Gavin Condren, Tania Whitbread, Andrew Kelman, Roxanne Grant and Trisha Mason.

Ann Newmarch Retrospective 'The Personal is Political' curated by Julie Robinson was shown at the Art Gallery of SA in 1997. Lippard puts Newmarch's work into a global context.

Artplace is exlusively committed to Western Australian artists. The work of emerging artists is shown side by side with that of prominent artists in regular changing mixed exhibitions...Artplace shows aboriginal art as part of contemporary WA art and the gallery has a strong emphasis on giving talented artists their first solo show.

From First Canvas to National Collections in Three Years

The story of senior women from the remote community of Kintore Northern Territory, who after just three years became Central Australia's most sought-after artists. 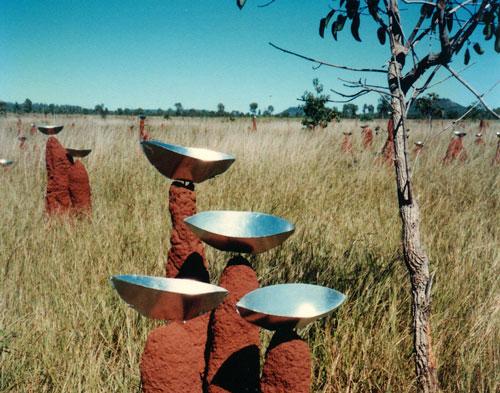 The tyranny of paradise or ... On being an emerging artist in Darwin

Over, Under, Sideways, Down

Brett Jones, artist and administrator of artist run space West Space, which is located at 42 Albert St Footscray in Melbourne examines some preconceptions about emerging artists. Includes the works of June Furness and Steven Cox.