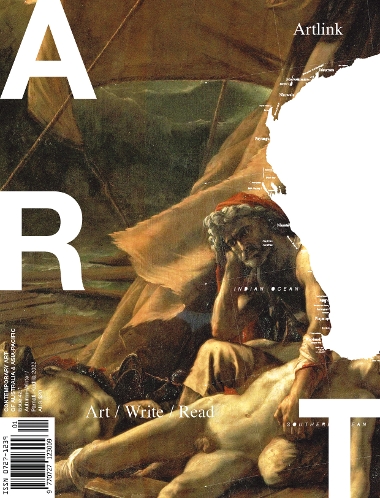 I don’t think there are many “shoulds” in art, but knowing more than less is one of them.

It is hard to write about art while ecological and humanitarian crises explode around us. It’s harder still to close in on writing about art writing, and the writers of art writing, while thinking of the readers of writing about art writing—a point I’ll return to. This irony of real-life catastrophe in relation to more esoteric and elitist concerns is not lost on the editors. In their opening paragraph, Brad Haylock and Megan Patty acknowledge ‘worsening wildfire seasons’, ‘the warming Arctic’ and ‘toxic nationalism’ as many do in these stranger times.  There seem to be a few schemas here: a First Aid guide for an industry in triage, a passion project on niche writing and publishing, and a strategic professional mission. 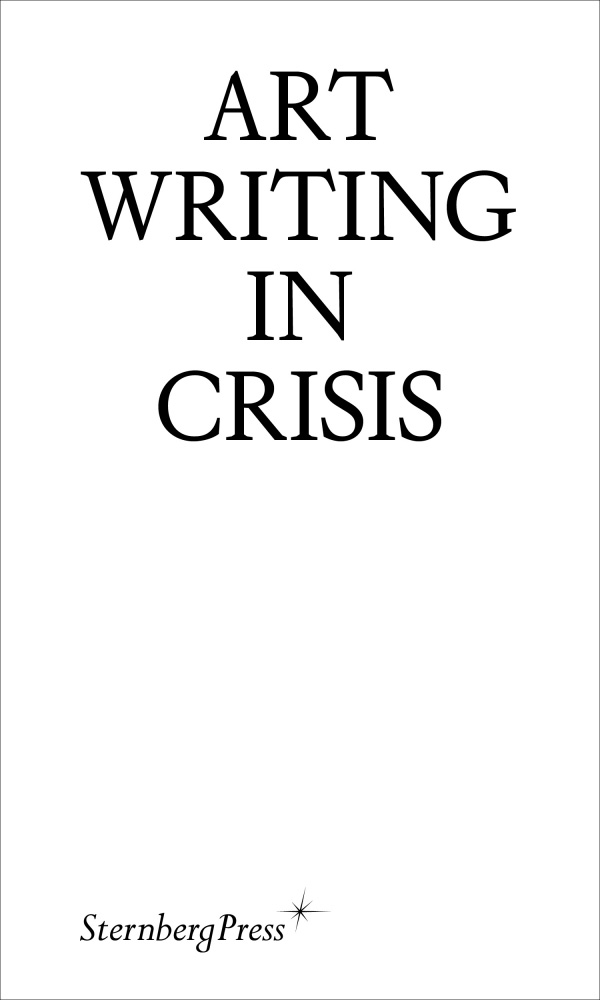 Art Writing in Crisis is capitally endorsed: it’s the product of a creative industries collaboration with support from an Australia Council Grant, Post-global publishing: internationalising Australian art writing through editorial innovation. Haylock is Associate Professor in Design at RMIT and founder of the bespoke publisher Surpllus, and Patty is Head of Publications at the National Gallery of Victoria and Founding Curator of the Melbourne Art Book Fair. Each makes a distinct contribution to the book in addition to their editing roles: Patty’s engaging essay on the genesis of the museum catalogue and its contemporary standing draws on scholarly research and industry experience, and she will know first-hand the challenges of curatorial authorship, institutional authority and associated hierarchies. Haylock co-authors, (with Paul James, Professor of Globalization and Cultural Diversity at WSU) a more laboured chapter theorising the Anthropocene with an ultrathick neologism (after Duchamp’s infrathin). It’s not this reader’s first encounter with ‘Anthropocene-centric’ writing that tries to apprehend the inapprehensible scale and immanence of climate change and the Sixth Extinction, but it’s a genre that struggles under the weight of its remit.

Twenty-two essays make up the anthology, with three previously published. Of 28 contributors, eleven are Australia-based—ten in Melbourne. What shines through in the best of the essays is the subjectivity of the writers and the clarity of their thinking in times of peril. And it’s a collective that comes in all fonts: philosophers, poets, publishers and critics, curators, editors and designers. Interestingly, none identify as straight art historians, and only a few artists have slipped through the cracks by interdisciplinary or genealogical means. For instance, the editors interview with Flavin Judd on Donald Judd’s legacy, explores the writing artist that Dad Judd embodied. (Today he’d be known as an influencer, and Joseph Kosuth’s Art after Philosophy as the thinking post-ers guide).

Art writing’s definitions are as manifold, complex, and pleasingly equivocal as the writers. Justin Clemens’s playful dialectical essay (first published in 2011) pulls the reader all over the place. One moment ‘…there’s no form of writing that hasn’t found its indiscernible double in art writing. By the same token, art writing is always unwriting too—and, however legible, therefore unreadable.’ You could stop reading there, but if you continue with Clemens, ‘You can read it as if it were just writing-about, but then you’d be missing the fact of writing-that.’ And so it goes: the subtexts are the joke, lest we follow too earnestly.

For Dan Fox (New York), the ‘softer label of “art writing”’ obscures ‘the state of criticism’ self-declaring that it is overwhelmingly stacked with white males. After two decades as an editor with Frieze magazine, Fox knew ‘the noisy end of the anglophile art magazine trade’, and his writing (note: not criticism) was located in the juncture of multiple art worlds (institutional, art market, grass-roots, academy and VIP trash-set). His diaristic letter from Manhattan in lock-down is a historical survey of twenty-first century writerly trends, a ‘riff’ on the ‘turns’ of language in the service of art-business.[1]

Cue another New Yorker, Barry Schwabsky (Artforum, The Nation), whose analysis of ‘critical localism’ is a discussion with which Australian writers would be cognisant: the critic is the most localised of writers, the local matters, and mobility comes at a price rarely afforded the freelance art writer. Both Fox and Schwabsky explode the metrics applied to their work and the inequities plaguing writers’ livelihoods, and they draw from a much bigger waterhole than we do in in Australia.[2]  It’s all in the clicks and the critical mass. Ben Eltham (Melbourne) applies similar data analysis to the local (national) setting, his intel is a provocation on taste in imaginary dialogue with the late Clive James, post-national treasure that he was, for those who have a living memory of the late twentieth century.

Returning to the idea of Art Writing in Crisis as a ‘reader’ for the editor, educator or art writer, there are a few salutary points. Firstly, this art writing crisis is not new, and criticism has been on life support since it was born (and lives on to tell the tale). A search of any well-resourced academic library will show the reader as much. Secondly, as hegemonic media platforms continue to squeeze, like a victim in the grip of a boa, screaming will only cost us valuable oxygen. Better energies are put into leveling the field of art writing and the voices which give it its urgency and purpose. Maddee Clark (Melbourne) gives an instructive but enquiring lecture on decolonising the art world, based on material developed through un Magazine. Earnest white friends and associates might be scratching the DECOLONISE NOW stickers off their lap-tops, but what to do with the old MONA T-shirt? A correspondence between Taylor Renee Aldridge and Jessica Lynne (Los Angeles; Virginia) refutes the myth of critical distance and return to the principal essence of criticism. Their context is black women writers, but it is applicable to critics of all codes: ‘…we must tell the truth. Especially to ourselves.’ If only the truth would show itself.

It's one thing to blame the supposed declining quality of art writing (and especially criticism) on the curator (as a number of writers here do), but is this ‘crisis’ an artworld myth? The book provides evidence for a counter argument in its discussions and examples of alternative publishing and inventive and lucid writing. As Nikos Papastergiadis and Hou Hanru observe in “Zooming in and Zooming out”, there are still books in people’s homes. More anecdotal research suggests its mobile devices and the mass of content that has done the real damage to art writing. We all imagine a reader. But what if she never cracks the spine?

Una Rey is the Editor of Artlink.

Art & Text: the rise and fall of theory