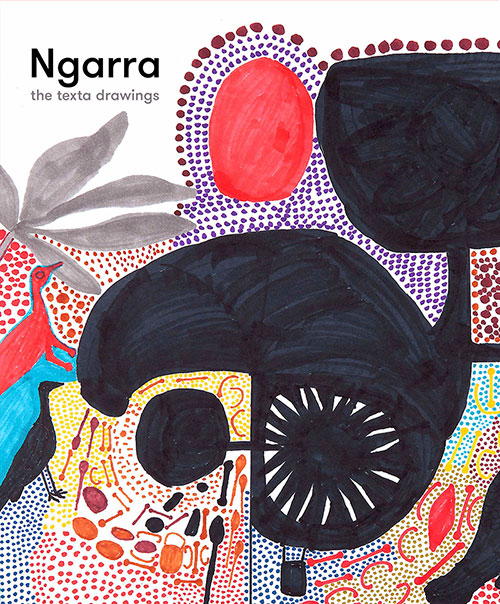 The medium employed to make a work is often just as important as the concepts and ideas it expresses. Texta might seem like an oddly cheap, throw-away material to use when your subject matter is ancient stories that come from the oldest living culture in the world. But, harnessing the medium through experimentation and practice, Ngarra’s works on paper using Japanese textas create marks that are as textured and gestural as a brushstroke and as deep as ochre.  You can’t just paint over an accidental slip of a texta, adding extra layers simply makes the colour darker and deeper. It is an unforgiving and bold medium.

Like many great Aboriginal artists, Ngarra (1920–2008) didn’t start practicing art until late in his life in 1994 at the age of 70.  A stockman and bush man, Ngarra spent his life traversing two worlds: from the sphere of white pastoralists to custodianship of knowledge and practice taught to him by his grandparents in Mornington, in the Kimberley ranges. As an outsider who could slip in and out of work as a stockman and time spent with his grandparents, Ngarra was able to see the world through the eyes of his Elders and predict the damage that the white mans’ way of farming would have on country. In his works, Nagarra features stories from the old people, clan estates, bushmen, stockmen, the wet and dry seasons and flora and fauna that speak of a life lived, saturated with immense cultural knowledge.

In terms of Ngarra’s technique and subject matter, stylistic comparisons can be made with Tommy McRae (c. 1835–1901). McRae was a fellow stockman who documented Aboriginal hunting and ceremony using ink and pen on paper along the upper Murray area of New South Wales during the late 1800s. David Frank’s prints, depicting his life as a policeman and images of Christianity, provide a more current comparison. Frank, who currently lives and works in the Indulkana community, grew up at Mount Cavanagh cattle station where his father was a stockman before becoming a police officer for over fifteen years. During this time, he utilised his practice as a ngangkari (healer) to calm situations. His works show a similar playfulness to Ngarra’s. Ngarra’s northern peers are Paddy Bedford (c. 1922–2007), Freddy Timms (b. 1944) and Ginger Muunduwalawala Riley (c. 1936–2002), who with their topographic landscapes and (particularly in the case of Riley) frequent inclusion of animals and figures tell the story of land, people and culture with such assertion and energy that they attracted a global audience..

Ngarra: The texta Drawings is a beautifully curated book with essays from Henry F. Skerritt and Nick Tapper, as well as notes by Kevin Shaw, Ngarra’s great friend, art dealer, biographer and Barngku (grandson). Shaw is the notable authority here, having spent thirty years going bush with his Jabiji (grandfather). As a collection of delightful stories from Ngarra about his life and work, the accompanying texts help to paint a picture of the life and legacy of a man with a cheeky outlook on life, fuelled by an obsession with the importance of story and communicating that vision and knowledge through his art. This is an important and beautiful book full of vigour, strength and honesty of purpose.