You can’t ignore the connection between Henry Jock Walker, his art and his surfing. The culture that surrounds the sport has long been the driving force behind his making. Although he tends to keep one hand in the sphere of painting, he also works with live performance, installation and video, slipping between the processes of making art and catching waves. The result is a dynamic and liminal practice that defies easy classification.

Henry’s focus has recently shifted away from the more obvious references to the sport and delved deeper into those on its peripheries. After years of engaging with the surfing community and its history, he sought to use what he had learnt as a way of exploring and connecting with others to expand both his life and his artistic practice. He began to think about the act of chasing waves (travelling) and the localism encountered on the way, and after the purchase of a van with enough room for himself, some paint and his boards, he hasn’t looked back.

In 2013 he circumnavigated Australia with a project called Henry’s Mobile Studio (HMS) commissioned and developed through the Kickstart program for the Next Wave Festival 2014. Inspired by a South Australian group called the Australian Bureau of Worthiness (ABW), who put connection with community at its core, he set off with the view of gaining a greater understanding of himself, his creative life and what it meant to be Australian.

In the same way that the surfer is always searching for a good place to catch waves, the artist in him seeks opportunities to make art in as broad a setting as possible. For Henry, this is sometimes organised in advance, sometimes where he stopped for lunch, sometimes just the feeling, as the van was flying down a highway, of “living the dream”, and finding the high that can only be felt when relying purely on instinct.

An integral aspect of this journey was meeting people wherever he found himself, using art as the excuse for breaking into the localism of a small town. Unlike a surf break, fiercely protected by those who frequent it, there were no signs proclaiming “LOCALS ONLY” at the entrance to the towns he passed through, but he often encountered a similar vibe. In much the same way that a newcomer has to earn their place in the surfing line-up, Henry had to earn the trust of the community, defending his loud and confronting performances to a macho Aussie crowd. With time, patience and perseverance, his friendliness won out and more often than not a connection formed and a group painting made.

Not one to discriminate, each of these became as important as the others, memorialised in the van for the remainder of the trip and included in the countless exhibitions that followed. In the last couple of years, Henry has spent more time in his home state, starting out in South Australia’s mid-north on the Burra Residency and Ephemeral Art Project, organised by Country Arts SA. The project concluded in April this year with The Expanding Paddock of Agricultural Expressionism, a collaborative painting performance in the centre of town. With his Dad’s tractor as its focus, it was about involving as many new friends as possible as action painters. Taking on the role of overseer, it was the local community and visitors from the city, who met and mingled to create the work.

A country boy himself, having grown up in Willalooka, these projects reconnect Henry with his regional roots. His family relocated to Adelaide when he was in primary school, but his early years have clearly had an impact with his ability to form a community wherever he goes. In high school, the family moved closer to the beach and it was here that he was introduced to what would become a lifelong passion for surfing as the feed and fodder for his art. The result is the formation of his own kind of wave theory and enthusiastic localism, albeit one that aims to turn the surfing reference on its head.

The action in Burra has continued more recently with a trip to South Australia’s West Coast, painting and collaborating with anyone willing to get involved. A typical pilgrimage for surfers, it makes sense that this is where Henry would continue to refine what he has learnt on previous projects. Much more structured than the original HMS trip, a series of workshops in different towns were arranged in advance, but the freedom of The Expanding Paddock of Agricultural Expressionism has remained. Paints were supplied but the processes and outcomes varied from day to day, depending on what was available and who joined in. Working mainly with young people, Henry led participants in an exploration of painting, encouraging the group to create as broad and free a definition of the expressive possibilities of painting.

Just like his practice, Henry’s future is hard to pin down and it’s impossible to guess what’s coming next. Continuing to use the processes of painting as his means of interacting with people, his works will no doubt become more free-form as he hands over more of the control to his collaborators. But what we can be sure of is the energy and enthusiasm he puts into bringing people together and enabling the inclusion of anyone keen to have a go.

Henry Jock Walker is currently participating in a residency at the Egg and Dart Gallery in Thirroul, NSW, collaborating with local surfers and artists, including Aaron Fell-Fracasso and Gregory Hodge. Henry is also co-creating new works with Jon Campbell, John Wardle, Sam Songallo, Tristan Kerr and Atlanta Eke for an exhibition at BUS Projects, Melbourne, in November 2016.

Photographer Che Chorley is currently cycling the full coast of South Australia and working on a project called Land You, Sea And Me.

Jessie Lumb is a writer and artist working in the field of sculpture and installation. She recently undertook a residency with Arts in Health at Flinders Medical Centre as part of the South Australian Festival of Living Artists (SALA). 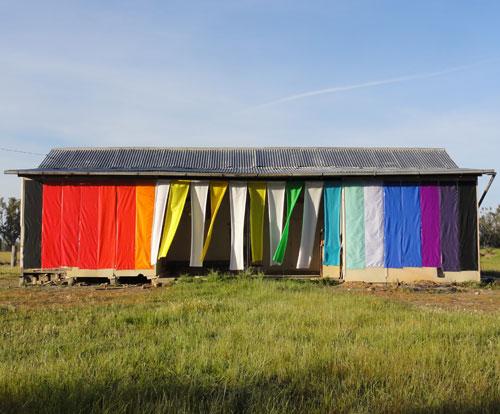