Chiharu Shiota: State of Being Sue Saxon and Jane Becker: All that is solid melts into air

Tarrawarra Museum of Art outside of Melbourne was certainly worth the journey during the substantial and satisfying February to May 2012 exhibition cycle, offering a thoughtful and non-sensational presentation of contemporary art. Two outstanding installations by women artists, international and Australian, deserve particular attention. The Japanese artist Chiharu Shiota resides in Berlin and brings a tangible Biennale-style international flair and seriousness to the gallery. A video of a Berlin opera performance featuring her designs adds a distinctly European ambience and an intriguing aural presence in the gallery. The installation worked the long passage that runs the length of the building in a manner that was pleasantly accessible and intelligently attuned to the space, leading the eye past the sideways view of the vineyards and the dam to the final vista through the window towards Long Gully Road the national park and the ranges.

Myriads of black woollen threads traversed the corridor, transforming it into a dramatic space. This network of black wool could have appeared arachnoid (and frequently children and Tolkien anoraks have described the installation as "Shelob's lair") but actually was hard edged at closer inspection when the lines of wool revealed themselves as razor sharp in their clarity and trajectory. Collectively the intersections of thread took on something of a 3-D Cubist character and had a tangibly architectural presence, provoking questions about spatial enclosure and the construction of expressive structures and forms. Shiota sees her work as starting with drawing and the thread takes her line off the flatness of paper into space. Whilst the work seems low-tech, a high degree of skill is involved as she constructs the thread maze freehand with wool and a staple gun, starting in this case at the ceiling, using a scissor lift, and empirically assessing form and proportion as she constructs the installation, working down the walls from the ceiling. The inclusion of old musical instruments perhaps was a little sentimental and heavy-handed in symbolism, but lost in the mass of threads they were not intrusive.
The exhibition by Australians Sue Saxon and Jane Becker was a little more patchy, but their spectacular and poetic major piece All that is solid melts into air easily held its own against Shiota’s highly effective and extremely charismatic thread installation. Given Shiota’s impressive resume, this achievement is all the more noteworthy. The sentiments of the exhibition about the fragility of life and nature in a world teetering on the verge of ecological disaster were admirable, but did not always jell with the actual works and operated more as a separate narrative. Personally the egg as metaphor for life on a vulnerable planet or as cradle of life left me somewhat cold, as did the installation of plants growing in eggshells referencing a somewhat sub-Fiona Hall aesthetic. The copy of Sir John Tenniel’s drawing of Humpty Dumpty for Alice in Wonderland in crushed eggshell mosaic tellingly highlighted the current interest in craft techniques, meticulous repetitions of actions, self-discipline, and intense small scaled, devotional performances. The egg shell fragments were sorted for size and colour and stuck onto watercolour paper to create a large scale version of Tenniel’s illustration. This precision of hand reinforces the Victorian origins of the image, here repurposed as a memento mori to a world that hovers on the point of being irretrievable and irreparable as was Humpty Dumpty after his fall. The word “freefall” is spelled out in eggshells and LED lights, although it was somewhat too dim to read.

All that is solid melts into air had a haunting presence, delicate without any hint of tweeness, formed from ceiling high cascades of intact blown eggshells, each fitted with LED lights on wires like Christmas lights. Displayed in a darkened room, it radiated a truly magical aura in its subtle, carefully managed range of hues and gentle luminosity. Eggshells, which are deployed in so many banal suburban craftworks, so-called “Fabergé eggs”, overdecorated and embellished, as too the LED in myriads of Christmas front garden installations, here were used with intelligence and restraint to create a work that convinced equally via technical dexterity and aesthetic refinement. Tarrawarra also offered an outstanding selection of mid-century modernism from its permanent collection and an installation on Asian-Australian identity and the regional Asian diaspora by Brian Castro, Khai Liew and John Young, with Khai Liew’s cabinet-making once more of world class.

Ancestral memory: out of the shadows

University of Melbourne Research Fellow Fran Edmonds along with Victorian artists Lee Darroch, Maree Clarke and Vicki Couzens looks at the story of Aboriginal art in Victoria as a determined reclamation of the past, a cross-generational celebration in the present and a visionary guide for the future. 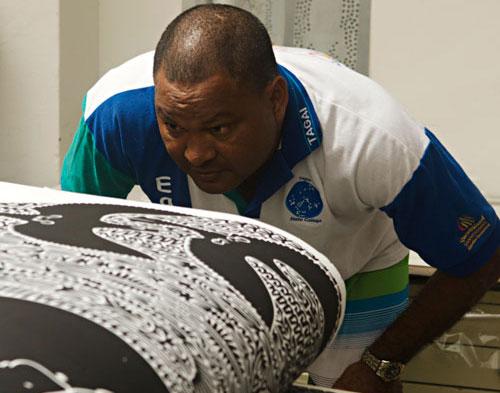 Artist and lecturer Garry Jones is undertaking a Phd at the Australian National University School of Art in Canberra. In this article he reveals some of his investigations of Aboriginal artefacts in museum collections and questions notions of authenticity, reclamation and reinvigoration of the past in contemporary Aboriginal art.

For architecture and country

Torres Strait Islander Kevin O'Brien, who is commissioning and directing an independent exhibition called 'Finding Country' at the Venice Architecture Biennale 2012 running from August to 25 November 2012, writes about an Aboriginal architecture that is not about buildings shaped like native animals.

Sam Cook is an artist, educator and currently the Director of The Dreaming: Australia's International Indigenous Festival. She writes incisively about the deep layers of 'lateral violence' in the Indigenous arts sector.

Marco Fusinato: There Is No Authority

Multi-disciplinary artists Jason Wing, who has both Aboriginal and Chinese forebears, undertook a residency in Xucun, a remote village in China, where Chinese artists Qu Yuan and Shen Shaomin have established the Xucun Art Commune in order to protect the village's beauty and heritage.

The exhibition 'Tu Di Shen Ti – Our Land Our Body, Masterworks of the Warburton Collection', was seen in China by about a quarter of a million people, across seven venues, throughout 2011. Director of the Warburton Arts Project Gary Proctor describes how the exhibition came about, what it looked like and what its goal are.

What lies buried on my land rises

Nyoongar artist Dianne Jones returned to York in Western Australia where her people come from and researched its tragic Aboriginal history.

A place of our own

This conversation between curator Hetti Perkins and co-editor Daniel Browning looks at Perkins call for a National Institution, or Centre, of Indigenous Art, which might become, as she puts it, “a living space that breathes culture”.